What comes to your mind when you think about video editing? A photographer, a video production house, a YouTuber or what? Let me know in the comments.

Video Editing these days is becoming a day to day task. But 8-10 years back, professionals videographers asked for a video editing software who is in a Video Production job in a movie studio or in any other video production house. With the advancement in technology, the machines we are using like Laptops, PC or even smartphones have enough potential to edit video brilliantly, with a professional outlook. We don’t need special types of equipment, hardware or video editing studios to edit videos.


So today, you are going to get your Video Editing Software that would make your special videos even more special. So, without any delay and more Intro, let’s get to work. (The series has no relation with Software’s Ranking. This is Random List)

Sony Vegas Pro is the video editing software by Sony and it is quite a popular video editor among YouTubers. Sony Vegas Pro has an intuitive user interface that is quite easy to use and easy to learn even if you are a beginner. It comes with some powerful features like Multi-Track Audio, Video timeline, support to 4K videos, 3D Editing. The whole layout of Vegas Pro is handy and convenient. You get the Preview Window in which you can monitor the new changes in the video. There are a couple of inbuilt Video FX which makes the video even more appealing. You can import any video with popular video formats and Vegas Pro can give you output in MP4, AVI, WMV, OGG, MP3, etc. Sony Vegas Pro is available for Windows only but has support for iOS devices with some extra applications. Sony Vegas Pro is for those professionals who are ready to pay for it. Although, Free Trail is available.

Check the Pricing and other Features of Sony Vegas Pro.

Talking about Creative job and Adobe is here. This time Adobe comes with Premiere Pro. Adobe Premiere Pro is the most popular Video Editing Editing software that is available for Windows and Mac. Many professional Youtubers are also using Adobe Premiere Pro to edit the videos for YouTube. The whole ecosystem that Adobe has is integrated and immensely powerful. With Adobe Premiere Pro, you can integrate your Photoshop, Premiere Pro, After Effects and other Adobe Products using Creative Cloud which is a service by Adobe to its customers.

If you are a Windows user, you can skip this and move to #4. Final Cut Pro is one of the Best Video Editing Software available for Mac users. Final Cut Pro is developed by Apple Inc. and available only for Mac. Final Cut is known for its UI which is brilliantly structured. You will get an idea about the power of Final Cut Pro by knowing that movies like X-Men Origins (2009), The Girl with a Dragon tattoo (2011), The Social Network (2010) [SEE FULL LIST] are some of the movies that were edited on Final Cut Pro. So now, we should not talk about Final Cut Pro potential. If you can afford $299 for a video editing software for your iMac or Macbook. Go for it.

Filmora is another great video editing software by Wondershare which is a big name in the creative industry. It gives you a couple of good options for editing videos like Picture in Picture which allows you to add an extra layer of the picture, support for Green Screen, Video Stabilization, color tuning, frame by frame preview and much more. With Filmora, every month, you would get filters, animated elements, and other modern video effects that indeed very helpful in creating some appealing videos. Along with video Editing, It also helps you in the screen recording. If you are Youtuber who gives a tutorial, Filmora would be a good option for you. A trial is free to use. 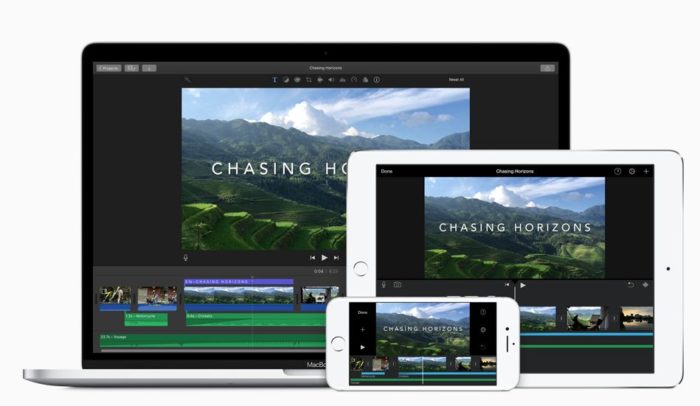 As the name suggests, iMovie is an inbuilt video editor in every Apple computer which was purchased after 2010. So practically, it is free and available only for Mac users. The dark interface of iMovie shows only those toolbox which is in use. That means UI is clean and easy to access. You can drag and drop the Raw video files to insert them into the timeline. iMovie also supports 4K videos and has support for 2 Video and 4 Audio tracks.

Finally a Video Editor just for Windows. Pinnacle Studio is video-editing software that is widely used by Windows users. Some of its features like Drag and Drop, Support for 4K videos, timeline-based video editing with support up to 6 tracks. The Pinnacle Studio has black and gray UI and used Project Bin UI where you can add your video files, clips, audios, pictures. Pinnacle Studio comes in 3 variants and if you wanted to edit 4K videos, then you have to buy the Ultimate version of it.

Corel Video Studio is the video editing software by Corel Corporation, the same people who developed the Corel Draw which is popular graphic designing software. It is available only for Windows and 64-Bit OS is highly recommended to use Corel Video Studio. Corel Video Studio allows you to add 6 Multicam tracks and also supports multi-point motion tracking, freeze frame, video masking, audio ducking and more.

Check pricing and other Features 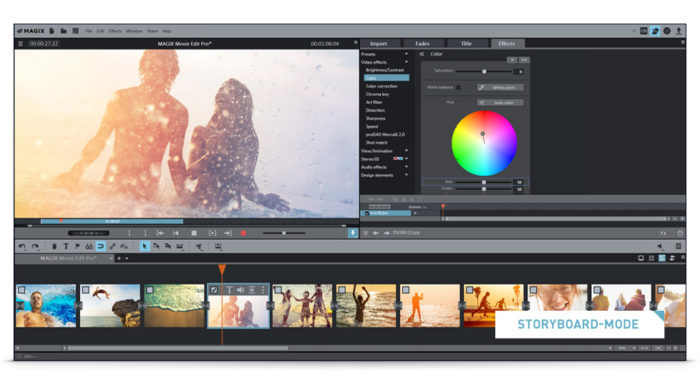 Another video editing software with a bunch of options but nothing new. Magix Movie Edit Pro has support for 4K videos, 32 Multimedia track, support for XAVCAS video files for Ultra HD videos, a library for intro, outro, video FX. There is one thing which is required to mention here is, if you wanted to edit 4K videos, you will need to install additional codec which would add cost you for $5.39 which for me is annoying. I have never seen such a kind of thing in any other video editor.

You probably have an idea about Camtasia. Camtasia is a widely popular software for screen recording purposes by TechSmith. But along with a great job of Screen Recording, Camtasia also do the video editing job and that too is quite impressively. Camtasia has all the video editing tools and supports but along with these, Camtasia has its own Video effects, Royalty-Free Music, Icons, motion graphics, lower thirds library which is free to use. Along with all these, you can also create animations. Camtasia is an all-rounder for those who record screen and then edit the videos. You can use the trial version for free.

Check Pricing and Other Features

So these are some of the Best Video Editing Software of 2020. Most of the above-mentioned video editing software is now available as android & iOS apps. You can see the best video editing apps here. These Video Editing Software have enough potential to edit a full-length movie that we watched in theaters. It all depends on How you push your limits of creativity. All the best for your movies/videos.

Do let me know which is your favorite video editor and let me know about other Video Editing Software that deserves a place on this list. Also, share this list with your Friend who is going to be a video editor soon.

Hey, I am Jayant, founder of this Blog. Being a tech enthusiast, I love to learn & share more about tech. You will either find me with my laptop or with the Guitar or be watching movies or with a book, basically, I am an Introvert.

51 Cool Websites on the Internet That is...

5 Ways a Chatbot Can Benefit Your Business

Hi Jayant. I am right now planning to create some videos for my educational blog and this post about video editing software is just in front of me. Right now using camtasia studio 7 for recording and editing videos. Thanks for posting this wonderful article for us.

about 60% of youtubers use filmora.

Exactly! It is simple to use and has various presets available.

Hey jayant,
As per my experience, being anew and struggling YouTuber, I will go with filmora. I haven’t tried other softwares and Permier pro is a bit advanced for beginners and I am sure you will agree on that. I have started a travel blog and now I am thinking about learning advance video editing for my travel vlogs on YouTube. this article is surely going to help me try new software to get a finishing touch to my videos.
Nice Post!