The Android phone is the leader of the Smartphone market with 86% of market share and the reasons are quite obvious. Android is a very flexible operating system for a phone. By using millions of apps available on Google Play Store one can do anything on an Android device. One of the interesting things you can do on Android phones is to record the android screen. There are a lot of great Android screen recorder apps that you can use to record android screen and gameplay.

Many readers were asking for ways or how to record the Android screen for various purposes. If you are a Youtube Content creator, especially if you publish tech-related videos or gameplay videos, this post can help you a lot. There are a lot of android screen recorders but very few of them deserve a place in your app drawer.

So, without any delay, let’s get to our business. Here are Best Android Screen Recorder for Android

You can even record the 720P HD videos on 60FPS. There is an inbuilt video editor which is very basic. Along with these, there is a lot of other functionality that you would get on AZ Screen Recorder like “Show touches”, Front Camera, Add text, Screen orientation, etc. Moreover, you can transfer the recorded video directly to your computer over wifi. This is my favorite Android Screen Recorder App so far. But wait, there are other screen recording apps also.

If you are looking for a minimalistic screen recorder for Android, there is nothing better than MNML Screen Recorder. The app comes with a simple yet convincing UI. You will get all the basic features to record the android screen.

This is one of the best screen recording apps you can use to record the android screen.

Mobizen Screen Recorder is another great app to Record Android Screen. The Floating “M Circle” has all its control. You can record Full HD videos at 60FPS (Depends on Device). With Clean Recording Mode, you can hide all the floating circles, touch pointers, watermarks from the screen. You do get a basic video editor which allows you to add music, split video, trim video. One thing that is missing on Mobizen is the brush. Unlike, DU recorder, you cannot draw anything on the screen.

The thing that makes Mobizen different from any other Screen Recording app is the support for Android 4.4 KitKat. If you are using the Android KitKat device, you can use Mobizen to record the Android screen and good thing is, you don’t need to Root your phone. 20% of Android phones are still running on Android KitKat that’s why this feature makes Mobizen different from other Screen Recording apps for Android. 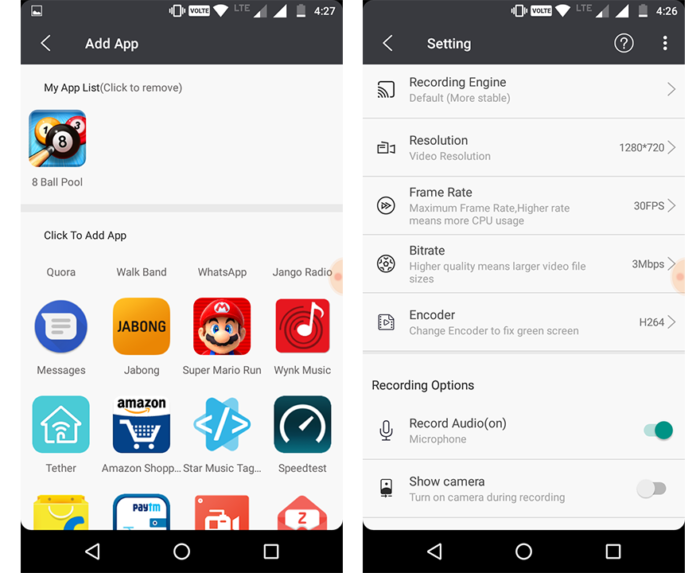 Game Screen Recorder is yet another Android screen recorder app to record the Android Screen but wait, as the name suggests. It is developed for recording the gameplay. If you are a Youtuber and publish GamePlay Videos, this app can record the gameplay on Android. The app will automatically detect the games installed on your device and show you on the Home Screen of the app. You can also record other apps by adding other apps and screens of Android. Game Screen Recorder gives you all the basic features like orientation, Resolution, FPS etc.

Simply drop down the menu and select Screen Recorder. Choose the audio source and start recording.

How to Record Android Screen on PC

These are some of the best screen recorder apps of 2020 that you can use for recording Android Screen. These apps can help you in recording the apps, games, or any Android Screen. If you have youtube channels where you publish Smartphone related tutorials or gameplay videos, then these Screen Recording apps will definitely help you in creating some awesome youtube videos.

If you know other Screen Recording Apps for Android, do let me know in the comment section. Also, share this list with your fellow buddies. Maybe they need the Android Screen Recorders.

Just 10 Whatsapp Update That You Should Know Right Now [UPDATED]

I AM A YOUTUBER AND THIS ARTICLE IS VERY HELPFUL FOR ME. THANKS A LOT. I ALWAYS NEED TO RECORD MY MOBILE SCREEN TO MAKE VIDEO FOR YOUTUBE. THANK AGAIN YOU HAVE SOLVE MY PROBLEM.

Hey Jayant…. Man, you just may be the person that will have the answer to my question…. Soooo. I am playing a game on my tablet. It was a free app… The game is pretty popular, and I am curious…. Can I add a brush stroke to the game screen, of which I am seeing, not needing the opponent to see, using the DU Screen Recorder app also…. What I want to do is when it is my turn to play, make a mark on the screen as a reference point, then be able to scroll the screen in relation to that reference point, and still record this all with an app such as DU Screen Recorder. As the DU app is, it has a brush feature, but what happens when I use that brush(mark) feature, the screen locks and I can’t scroll until that brush(mark) is erased, at which time the screen frees up and then I can scroll, but the mark I made is no longer visible, so I can not use the mark….

Have you tried this DU Screen Recorder Feature on other devices other than your Tablet? May be there is a bug in the app.

Hey Jayant, On my Android Phone with the built-in screen recorder I’m unable to record sound for office work, what is the solution,

You need to turn on the Media Sound while recording the screen. Hope that helps.