The drone delivery soon to turn to be in reality. As Amazon already starts Prime Air Drone delivery trials the UK. Amazon already successfully delivers one order in the Cambridgeshire, England. Richard B. the first Amazon Prime Air customer ordered Amazon Fire TV and a packet of a popcorn which was delivered within 13 minutes of placing the order. Amazon CEO, Jeff Bezos recently tweets a photo of a Drone carrying some Amazon’s box. 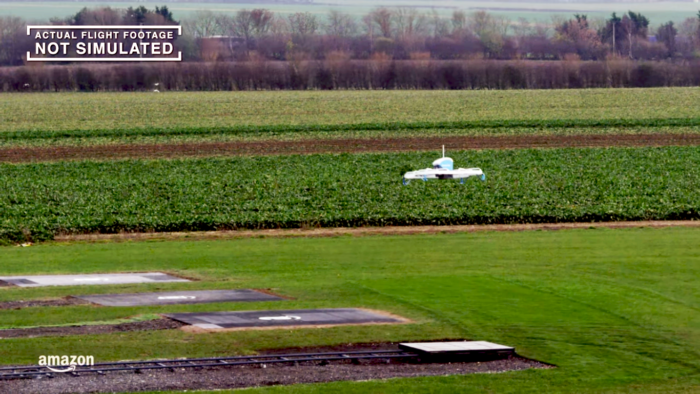 Amazon CEO, Jeff Bezos deliver this message to the world by tweeting a photo of a drone carrying the Amazon box.

First-ever #AmazonPrimeAir customer delivery is in the books. 13 min—click to delivery. Check out the video: https://t.co/Xl8HiQMA1Spic.twitter.com/5HGsmHvPlE

The product range eligible for Prime Air would be limited as of now. Also, don’t expect this similar service in any other country anytime soon. Because flying a drone is the legal offense in some countries and there are also securities issues related to drones.

The Drone of Amazon Prime Air itself not like the other Drones like DJI Phantom or any other drones. The device has the quadcopter design having 4 propellors and robotic arms holding the Box itself. Also, Drones are GPS enabled and track its way using GPS.

Amazon is just making the trials which are successful till now and we cannot expect the service for now. Amazon also requires to have strict safety measures in the Urban areas where there are a lot of Noise in the form of building, wires etc. The Federal Aviation Administration of US has banned the delivery drones as of now. According to FAA, these aviation vehicle needs sight of an operator for flying it legally. That’s why, Amazon make the trials in England, that too in the countryside not in the proper urban city. For getting all the permissions from the England Government, the Amazon’s drones faced some strict tests as the concern of security and safety.

Nevertheless, all these trials show the commitment of Amazon towards Drone delivery dream. We too are excited to see Amazon’s Prime Air drone in our home lawn.

Share your thoughts about Amazon Prime Air Drone Delivery in the comments.

Super Mario Run available only on iOS why not on Android?

OnePlus 5T: Here is Everything About the Latest...