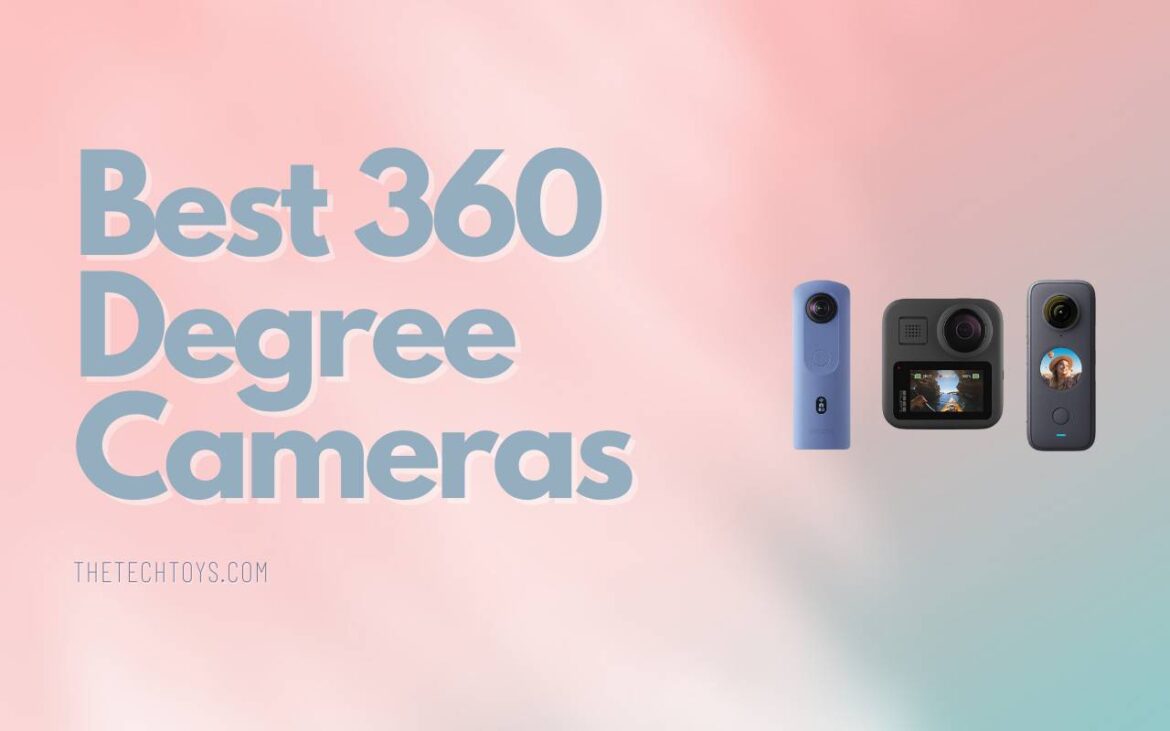 The 360-degree Camera for iPhone is the best camera accessory you can have. What makes them popular is the compatibility of 360 videos & 360 Photos with Facebook, Youtube & other social media platforms. The 360-degree camera basically a camera that can record/capture immersive videos/photos from every direction (360 Degrees) at the same time. You can see all the sides in the photos/videos just by hovering your finger on the screen.

If you have a VR headset, then you will have an all-new experience of 360 videos and photos. Along with 360 headsets, the 360 Camera acts as an extra step toward virtual reality.

The good thing about 360 cameras is that they are highly compatible with smartphones these days and you can record some of the coolest 360° videos and 360° photos right from your iPhone. If you are looking for a 360 Camera for iPhone, you are at the absolute right place.

Insta360 Nano strikes first whenever we talk about the 360-degree cameras for iPhone as it holds all the reasons to be considered. Insta 360 Nano S is a better version of its predecessor Insta360 Nano. Insta360 is the leader in 360 cameras and also the winner of the Innovation Honoree Award in the Virtual Reality category at CES. 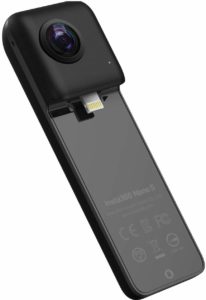 Insta360 Nano S is a small bar-like device having 2 cameras that connect to the iPhone through the lightning port. You have to install a 360 camera app by Insta360 from the App Store and after that, you are all set to take some coolest 360 videos and 360 photos right from your iPhone.

For nerds, the new Insta360 Nano S has a dual f/2.2 aperture camera sensor by Sony that can record videos in 3840 x 1920 at 30fps and you can capture photos at 6272 x 3136 resolution. For storage, there is an SDcard slot that supports UHS-I, exFAT(FAT64) format having storage compatibility up to 128GB. This little beast has an inbuilt battery of 800mAh that you can charge through micro USB 2.0.

There are different modes such as Multiview mode, Tiny Planet mode which made things pretty happen. The new Insta360 Nano is social media ready and you can go LIVE on Instagram and Facebook in 360-Degree which really makes the difference. With Multiview mode, you can share ‘YOU’ and the ‘View’ at the same time. Get ready to blow up your Instagram.

If you are an avid traveler who wants to capture and share your beautiful moments with the world in 360-Degree, the new Insta360 Nano S is worth every penny.

Insta360One is an improved and better version of Insta360 Nano. With Insta360 One, you can easily record 4K 360° video and 360° photos in 24MP. The great thing about Nano360 cameras is their stability. Insta360 ONE comes with FlowState Stabilization that is going to provide you steady 360 videos no matter what you are doing. You don’t need any gimble for smooth & steady videos. Insta360 One has everything built-in.

There is another awesome feature in Insta360 One that is called Shoot First Point Later. In this, you just need to select the scene and Insta360 One will automatically give you the ultra-smooth with pro-level video editing. You might see some 360-degree cameras that also show the selfie stick attached to it, but with Insta360 One, you don’t need to worry about that. The selfie stick will remain invisible all the time.

You can use the camera unit itself for recording and capturing videos and photos respectively, along with that, you can also use your iPhone to see the scene and to record it. No wires/cables are required. SmartTrack allows you to keep the focus on the main subject even while you are recording while running or in other rough movements.

For its price range, Insta360 ONE is indeed one of the best 360 cameras for the iPhone.

We don’t need any introduction to GoPro and its contribution to action cameras. GoPro Max is another reason why GoPro is the most loved action camera brand around the globe. With GoPro Max, you can record 5.7K 360-degree videos at 30FPS. You can also capture still images with GoPro Max.

Let’s talk a little about the camera and the hardware. The camera is made for rough use. You can use it the way you want. It is rugged and tough. Along with that, it is also waterproof up to 5meters when submerged in the water. The 6 mic setup makes sure it captures every sound in your surrounding and give you an immersive video whenever you watch it. With an inbuilt touch screen, you can control your camera in the most accessible way ever.

If you want a powerful, tough 360 camera, GoPro Max is indeed one of the best 360 degree camera you can buy right now.

Ricoh Theta SC2 is another 360 Degree camera. The Ricoh Theta S 360 video Camera comes with a dual 1/2.3 CMOS camera lens that gives you still images of 5376×2688 resolution and 4K 3840×1920 videos at 30FPS. You can also record 2K 1920×960 resolution videos at 30FPS. At one go, you can only record a 3 minutes 4K video which might bother you because you have to record a new video after every 3 minutes. There is another Theta Z1 camera that allows you to record 25 minutes video at 4K resolution. If that is your preference, check it Theta Z1 here.


For storage, we have 14GB of internal storage which is capable to save 3000 still images, 32 minutes of 4K video and 115 minutes of 2K video. The storage is enough for a lot of users. Unfortunately, there is no SD card slot for expansion but it is great to use the 360-degree camera without having a phone in hand. Simply point and shoot the videos. There is a small display on the camera itself that shows the battery, and connectivity options.

Through Ricoh’s latest Wi-fi module, you can get a high-speed transfer of images and videos shot with Theta to your smartphone. Ricoh Theta SC2 is indeed the best 360 Camera for iPhone. It is well built and its advanced features make it different and powerful from other 360 cameras available in the market.

Available in 4 gorgeous colors, Ricoh Theta SC2 is one of the best 360 cameras for iPhone and android that you can get right now. Highly recommended.

Here is another best 360 camera from Insta360. Insta360 One X2 is the most advanced version of Insta360 cameras. It comes with some of the best features and shooting modes that let you shoot 360 degrees videos. The new 360-degree cameras are independent and don’t need to connect to iPhone or Android. Simply point and shoot. Once you are done, you can access, and transfer them on your iPhone or Android.

The camera is also IPX8 Waterproof which allows you to record in 10meters deep water. The best thing is the stability that Insta360 One X2 gives you without even any gimble. Simply attach a selfie stick and start using the camera. The camera is also equipped with a 4-mic set up giving you a true 360-degree sound recording and immersive video experience.

The best about Insta360 One X2 is the bright touch screen. You can preview all your shots and control the camera settings using the touch screen. The camera also supports an external SD Card up to 1TB which is great especially if you are a content creator or going on a vacation. You don’t need to worry about the storage. Shoot and record as much as you want.

See Also: How to Find Someone Name by Phone Number

All these things are powered by a 1630mAh battery that you can charge using a USB Type-C port. If you are looking for one solution for a 360 camera, Insta360 One X2 is your answer. It comes with all the great features with Touch Screen. You really don’t need to use your phone to control the camera. Insta360 One X2 is indeed one of the best 360 degree camera for iPhone as well as for Android users.

Best 360-degree Video Camera: Which is your Pick?

These are some of the best 360-degree video cameras that you can buy for iPhone. If you are not an iPhone user, you don’t need to get sad as there are a lot of 360-degree cameras that are available for Android users.

See Also: Best Earphones You Can Buy Under Rs. 2000

Insta360 is a market leader of 360 degree cameras and you can easily get any of the Insta360 cameras mentioned above in this list. Insta360 One X2 is definitely one of the best 360 degree cameras you can get right now. It comes with a touch screen which makes the camera very easy to use. Apart from that, GoPro Max is also a great 360 degree camera to go with.

Which is your pick for the best 360 degree camera for iPhone? Do you have any other recommendations? Let us know in the comments below.

4 Must Have Technologies for Improving Customer Experience

HI…WHAT AN ARTICLE I IKE IT …AND WHAT A GREAT INVENTION..HOPE YOU WILL UPDATE US WITH MORE INVENTION IN FUTURE…BEST OF LUCK